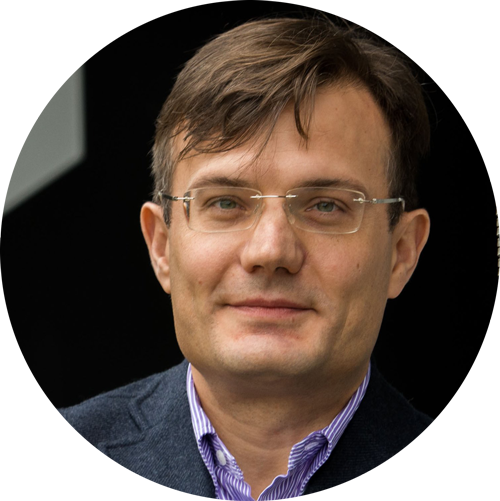 Prof. Rolf Krause's research focuses on numerical simulation, machine learning, optimization, and data driven approaches. The complexity of real world applications constitutes a challenge for model and data based prediction, turning the development of models and of solution methods into a challenging task. In addition to a well balanced combination of methodological and mathematical knowledge, it also requires experience in dealing with subtle aspects of the implementation.

Rolf Krause holds a chair of advanced scientific computing in the faculty of informatics and is the director of the institute of computational science (ICS). He is also the Co-director of the Center for Computational Medicine in Cardiology (CCMC) at USI
From 2003 to 2009, he was professor for Scientific Computing at the University of Bonn. During that time he spent a sabbatical at UC San Diego (USA) and Columbia University New York (USA). In 2002 he was on a research visit at the Courant Institute (NYU, New York). He holds a Diploma and a PhD (2000) in Applied Mathematics from FU Berlin (Germany). He is the head of the group "High Performance Methods for Numerical Simulation in Science, Medicine, and Engineering".

The research in his group focuses on numerical simulation for complex and data-intensive applications, techniques for advanced machine learning, and scientific software for large scale applications and HPC. As a new direction of research, the transfer of techniques from scientific computing and HPC to machine learning has been established in his group, paving the road to ExaScale ML. On the software side, in his group a domain specific language (Utopia) for Scientific Computing and Machine Learning is developed, which allows for efficiently exploiting modern and possibly specialized hardware, such as GPUs and FPGAs.

In terms of applications, focus areas are medicine, in particular cardiology; image analysis; geo-physics and geo-mechanics, including porous media and the modeling of fracture networks; computational mechanics for non-smooth systems, including friction and contact.

Prof. Krause is Co-Founder of the Center for Computational Medicine in Cardiology, together with Prof. A. Auricchio, and the founding director of the ICS.

His editorial service includes the SIAM Journal on Scientific Computing (SISC) and Computing and Visualizatio in Science (Springer), and Numerische Mathematik (Springer).

Co-Founder of the start-up “Algo4U Sagl”

Offer for a W3-professorship “Wissenschaftliches Rechnen” (Scientific Computing), University of Hannover. Not realized

Visit at the University of California, San Diego, supported by the DFG

Visit at the Columbia University, New York, supported by the DFG

Offer for a full W3-professorship in Scientific Computing at the University of Mainz, not realized

Visit at the Courant-Institute of Mathematical Sciences in New York, supported by the DFG

Assistant lecturer at the Freie Universität Berlin, Department of Mathematics and Informatics

Scientific assistant at the University of Stuttgart, Member of the Collaborative Research Center SFB 404 “Multifield Problems in Solid and Fluid Mechanics”

Electedmember of the Academic Senate of USI

Elected member of the Academic Senate of USI

CCMC - Center for Computational Medicine in Cardiology, Responsible for creation and build up of the center at ICS/USI. R. Krause (ICS/USI), A. Auricchio (CCT/USI). • Project financed by “Biologics Delivery Systems” on electromechanical coupling in the human heart. 1 PostDoc

Project with Siemens and U Wuppertal on the prediction of material fatigue: Life Expectancy in extreme temperatures. H. Gottschalk (U Wuppertal), R. Krause (ICS/USI). 1 PhD at Siemens/Mühlheim.

Responsible for the initial build-up of the core group of the Swiss HP2C-initiative High Performance and Productivity Computing located at the ICS/USI.

Ticino in rete – Computational Life Science Network A high performance approach to cardiac resynchronization therapy - development of a validated multiscale model for the study of the electrical activation system of the human heart using adaptive simulation techniques. R. Krause (ICS/USI), A. Auricchio, Cardio Centro Ticino, Lugano, and Prof. Dr. F. Prinzen, University of Maastricht. 1 PostDoc. Within the scientific framework of this project, the endowed visiting professorship “High Performance Computing in Cardiac Simulation” (M. Potse) has been created within the Faculty of Informatics at the Institute of Computational Science.

Workshop in the honor of K. Kunisch, Graz, 2018, Non-linear Domain Decomposition and Multigrid Methods in Optimization

Adaptive methods in space and in space-time for electrophysiology - from spatial adaptivity to spacetime adaptivity with local time-stepping, CBC Workshop on Dynamic Adaptivity, December 9-10, 2015, SIMULA, Oslo

Coupling of finite element and finite volume methods for fluid-structure-interaction in a monolithic scheme in the minisymposium “Computational Biomechanics”, World Congress on Computational Mechanics, 2014, Barcelona (with J. Steiner)

A lightweight approach to parallel adaptivity in electrophysiology in the minisymposium “Advances in Computational Cardiovascular Modeling and Simulation”, World Congress on Computational Mechanics, 2014, Barcelona (with D. Krause, S. Pozzi)

A posteriori error estimators for contact problems (with M. Walloth and A. Veeser), Euromech Colloquium on Contact Problems, Corsica, March 2012

PASC 17, Conference of the Platform for Advanced Scientific Computing, Lugano, 2017

Since 2018: Member of the Scientific Advisory Board of ZIB (Zuse-Institut Berlin) www.zib.de

≥ 31 completed diploma/master and bachelor theses in the areas computational geo-sciences, contact problems, multiscale simulation methods, simulation of biomechanical and biological processes, bionics and continuum mechanics, cardiac simulation, and GPU accelerated computing (partly in cooperation with the Jülich Supercomputing Center, the Institute of Zoology at the University Bonn, and the Swiss Supercomputing Center CSCS);

Participation in the Swiss Graduate School “Computational Toolbox” within the SUK-program “Doktoratsprogramme” Leading House: University
of Basel with participants from USI and ETH Zurich. 01/2013-12/2016

former Participation in the post graduate program (DFG-Graduiertenschule) “Bionics – interaction on boundary layers” with the PhD scholarship:
“Design of a biomimetic infrared (IR) sensor: Numerical simulation of the transduction-process” 08/2008-07/2011

Krause, R. Complex Multiphysics in Cardiac Simulation: From Patient Data via Electro-Mechanical Activation to ECGs, May 2016.

Swiss TV (SF1 10vor10) reports about CSCS and HPCN strategy and the new Institute of Computational Science at USI, 2009.