EU-COST conference on The Future of Statistical Network Science

The scientific community at the Università della Svizzera italiana is invited to a public EU-COST conference on "The Future of Statistical Network Science" organized by the Chair of the EU COST Action COSTNET Prof. Ernst C. Wit (Professor of Data Science at USI).

The conference brings together 7 prominent, international researchers in the field of statistical network science.

The EU COST Action COSTNET has been funded since June 2016 and brings together approximately 450 researchers from 33 countries. It is led by Prof. Ernst C. Wit (ICS, Faculty of Informatics, USI). It has organized 11 meetings in the past 3 years and has initiated a large number of research collaborations. More information can be found on here.

Attendance to the conference is free, but please send an email to by April 1st.

Göran Kauermann (Ludwig-Maximilians-Universität München): Temporal Network Models: understanding the trading of arms
Abstract: The talk starts with an introduction to Exponential Random Graph Models (ERGM), the statistical work-horse model for the analysis of network data. We demonstrate the central modeling idea and discuss estimation strategies. The model class of ERGMs is then extended towards dynamic models, that is for network data which are observed at different time-points t=1,….T. We discuss two central models in this field. First, the temporal Exponential Random Graph Model (tERGM), which is an extension of the classical ERGM by allowing network statistics to depend on previous networks. Secondly, we introduce the separable temporal Exponential Random Graph Model (stERGM), which allows to decompose temporal changes into edges that develop and edges that vanish from one time-point to the next.
The models are applied to network data on arm trading, provided by the Stockholm Peace Research Institute (SIPRI). The data give inter-state arm trading of heavy conventional weapons (tanks, air crafts, missiles etc.) from the 50th up to the recent years. We explore what drives the changes in the network by employing the two proposed temporal network models.

Gesine Reinert (Oxford): Anomaly detection in networks
Abstract: Detecting financial fraud is a global challenge. This talk will mainly focus on financial transaction networks. In such networks, examples of anomalies are long paths of large transaction amounts, rings of large payments, and cliques of accounts. There are many methods available to detect specific anomalies. Our aim is to detect unknown anomalies. To that purpose we use a strategy with derives features from network comparison methods and spectral analysis, and then apply a random forest method to classify nodes as normal or anomalous. We test the method on synthetic data which we generated, and then on synthetic data without us having had access to the ground truth. This talk is based on joint work with Andrew Elliott and Mihai Cucuringu, (Alan Turing Institute) as well as Milton Martinez Luaces and Paul Reidy (Accenture).

Vladimir Batagelj (Ljubljana): On Fractional Approach to Analysis of Linked Networks
Abstract: We present the outer product decomposition of a product of compatible linked networks. It provides a foundation for the fractional approach in network analysis. We discuss the standard and Newman’s normalization of networks. We propose some alternatives for fractional bibliographic coupling measures.

Antonietta Mira (Università della Svizzera italiana): Bayesian Inference of Spreading Processes on Networks
Abstract: Infectious diseases are studied to understand their spreading mechanisms, to evaluate control strategies and to predict the risk and course of future outbreaks. Because people only interact with a small number of individuals, and because the structure of these interactions matters for spreading processes, the pairwise relationships between individuals in a population can be usefully represented by a network. Although the underlying processes of transmission are different, the network approach can be used to study the spread of pathogens in a contact network or the spread of rumors in an online social network. We study simulated simple and complex epidemics on synthetic networks and on two empirical networks, a social / contact network in an Indian village and an online social network in the U.S. Our goal is to learn simultaneously about the spreading process parameters and the source node (first infected node) of the epidemic, given a fixed and known network structure, and observations about state of nodes at several points in time. Our inference scheme is based on approximate Bayesian computation (ABC), an inference technique for complex models with likelihood functions that are either expensive to evaluate or analytically intractable. ABC enables us to adopt a Bayesian approach to the problem despite the posterior distribution being very complex. Our method is agnostic about the topology of the network and the nature of the spreading process. It generally performs well and, somewhat counter-intuitively, the inference problem appears to be easier on more heterogeneous network topologies, which enhances its future applicability to real-world settings where few networks have homogeneous topologies.
This is joint work with Ritabrata Dutta (Warwick University) and JP Onnela (Department of Biostatistics, Harvard University) 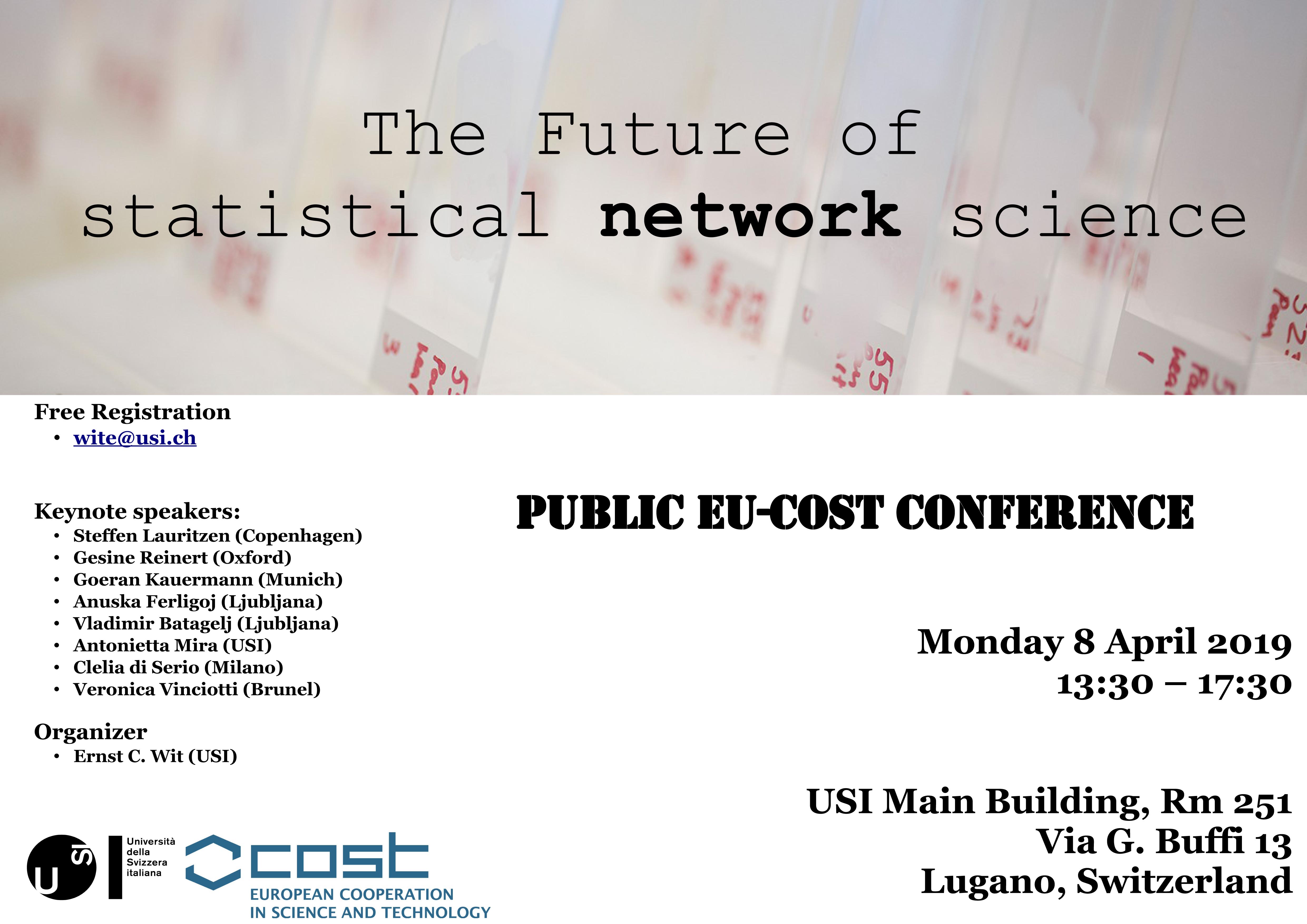