Our work focuses on development and application of classical and quantum simulation techniques for study of matter using high performance computing. The activities of the group have a strong interdisciplinary character ranging from solid state physics to chemical engineering to drug design.

Recent projects have been the study of drug unbinding, protein conformational changes, crystal nucleation, phase change materials, and proton transport in water. Through our work we have been able to provide insight into the physics and chemistry of these and several other complex processes of great social and technological relevance.

Research on methodological aspects is an important part of our activity. Of particular relevance is the development of enhanced sampling algorithms based around metadynamics. This method has made major progress possible in the study of long timescale phenomena which are ubiquitous in nature, but were previously inaccessible due to fundamental limits of computational power. The group has also been the pioneer of the DFT-based ab initio molecular dynamics of Car and Parrinello, CPMD. This method allows calculating the static and dynamical properties of solids, liquids, disordered systems and complex molecules accurately and without adjustable parameters.

DRUG UNBINDING. It is of paramount importance in the early stages of drug discovery to predict both how strongly and for how long does a drug stay bound to the protein. So far the major emphasis has been on predicting the strength of interaction as determined by the binding affinity. In contrast it has not been possible to use computations to predict the duration for which a drug stays bound. The dissociative half-life of the protein-ligand complex is defined as the time during which the ligand remains in the binding site. In principle this should be amenable to calculations through molecular dynamics (MD) simulations. However, in spite of the potential of MD simulations no such simulation has yet been reported. This is a consequence of the limiting timescales of MD simulations.

Metadynamics developed in our group is a popular technique that complements MD and allows studying complex systems. Using our recent significant extensions of metadynamics, we can now for the first time study protein-ligand dissociation pathways and determine associated rates, reaching well into longer than seconds regime while maintaining full atomic resolution for protein, drug and solvent. This work will open up new horizons in the ability to calculate mechanisms and rate constants, and have a transformative effect on the process of drug design, hopefully making it cheaper and faster.

ALLOSTERIC REGULATION. Allosteric regulation plays an important role in a myriad of biomacromolecular processes. Specifically, in a protein, the process of allostery refers to the transmission of a local perturbation, such as ligand binding, to a distant site. Decades after the discovery of this phenomenon, models built on static images of proteins are being reconsidered with the knowledge that protein dynamics plays an important role in its function. Molecular dynamics simulations are a valuable tool for studying complex biomolecular systems, providing an atomistic description of their structure and dynamics.

Unfortunately, their predictive power has been limited by the complexity of the biomolecule free-energy surface and by the length of the allosteric timescale (in the order of milliseconds). Combing all-atom molecular dynamics with enhanced sampling methods developed in our group, we are able to probe the origins of the allosteric changes that transcription factor mixed lineage leukemia (MLL) causes to the interactions of KIX domain of CREB-binding protein (CBP) with phosphorylated kinase inducible domain (pKID). We compare our results with previous experimental studies. Through this research we are able to develop a general simulations protocol to study allosteric phenomena and many other biological processes that occur in the micro/milliseconds timescale.

PHASE CHANGE MATERIALS. Phase change materials are the building blocks of state of the art optical storage devices and of the next generation of non volatile memories, which foreshadow multi level programming, nanowires based architectures and an important role in neuromorphic computing. All of these applications rely on the fast and reversible switching from the disordered phase to the crystalline state, which takes place in the nano domain with respect to both the time and the length scales.

In order to unravel the atomistic details of the fast crystallization, we have taken advantage of Neural Network based interatomic potential for GeTe that obliterates the well known computational limitations of first principle calculations, in terms of system size and timescale while retaining the accuracy of a density functional theory framework. Thanks to this powerful tool, we have been able to perform large scale molecular dynamics simulations of the crystal growth of GeTe at the interface between the crystalline and the supercooled liquid phase, employing models that really bring our simulation playground extremely close to the actual crystallization scenario so extensively explored experimentally.

GROWTH OF ORGANIC CRYSTALS. Nucleation and growth of a crystal phase from solution is a ubiquitous phenomenon of primary importance both in natural and industrial processes. Biomineralization phenomena as well as the production of sophisticated synthetic drugs or expensive fine chemistry compounds are just some of the processes that crucially depend on the nucleation and growth of a crystal from a dispersed and disordered phase.

The identification of nucleation mechanisms, the mechanistic description of crystal shape evolution during the growth process or the influence of foreign molecules on both nucleation and growth, represent only a fraction of the open problems in this field.

In this framework, molecular simulations play a primary role, allowing to obtain an insight into the elusive phenomena that occur at the molecular scale. In our research we apply enhanced sampling simulations to investigate both nucleation and growth of organic molecules from solution.

The Abdus Salam International Centre for Theoretical Physics has awarded Professor Michele Parrinello and Professor Roberto Car the 2009 Dirac Medal and Prize in recognition of their joint contribution in the development of the ab-initio simulation method in which they combined the quantum mechanical density functional method for the calculation of the electronic properties of matter with molecular dynamics methods for the Newtonian simulation of atomic motions.

The 2009 Dirac Medal and Prize awarded to Prof. Parrinello and Prof. Car 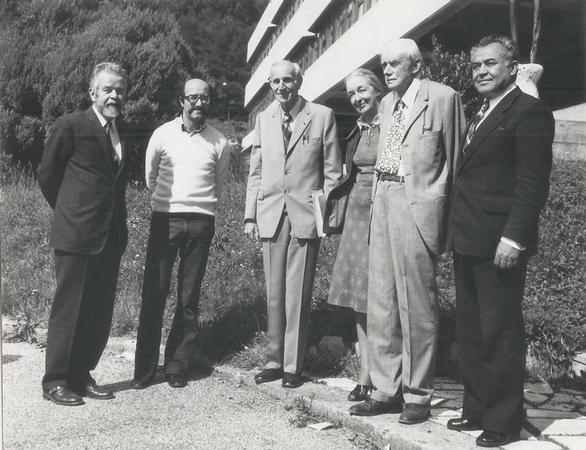 In 2011, the Board of Trustees of the Marcel Benoist Foundation under the chairmanship of Federal Councillor Didier Burkhalter has awarded the Marcel Benoist Prize to Michele Parrinello. The physicist and molecular scientist receiving the award in recognition of his computer-aided models in the field of molecular dynamics. 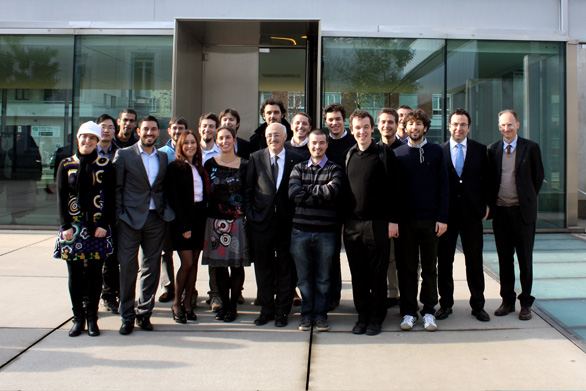 A quantitative measure of chirality inside nucleic acid databank
A. Pietropaolo and M. Parrinello
Chirality 2011, 23, 534-542