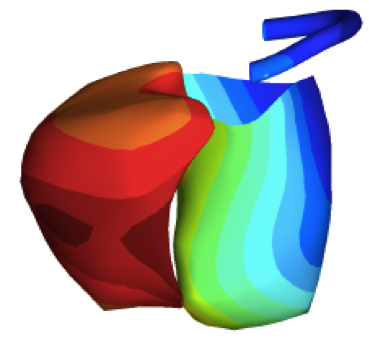 The number of patients with chronic heart failure (HF) is increasing rapidly throughout the industrialized economies. Progressive pump dysfunction and sudden cardiac death are the primary causes of mortality in HF. Despite the implementation of guideline-mandated pharmacological therapies, the prognosis of HF patients remains poor. In this scenario, cardiac resynchronization therapy (CRT), has emerge as one of the most important breakthroughs in the treatment of HF, with remarkably consistent positive benefit in CRT treated patients. Nowadays CRT can treat 25-30% of patients with symptomatic HF and it is recommended in HF patients in NYHA class II-IV, presenting with left bundle branch block (LBBB) and/or QRS duration >120ms. Despite these stringent criteria for the selection of CRT candidates, the rate of non-response remains significant (30-50%).

Especially in the field of HF cardiology, the use of CRT has raised concerns, because it was not understood how CRT as an electrical therapy could solve a mechanical problem like HF. Although recent clinical observations have indicated a close relationship between the QRS duration and response to CRT, the mechanism behind the relationship between CRT response and QRS duration is not entirely clear. Understanding the non-trivial interplay between electrical activation and mechanical contraction, including the evaluation of in-vivo electromechanical (EM) coupling, is crucial for full mechanistic understanding of CRT’s mode of action. Such a characterization will greatly help in 1) identifying the ideal substrate for CRT response; and 2) further strengthening the response in those patients who benefit from CRT. We postulate that a multimodal approach, integrating detailed mechanical and electrical information, can provide additional valuable information about the disease in the individual patient.

We recently developed a novel method for the in-vivo EM assessment, and in the present project we propose to explore the value of various novel descriptors of EM coupling for the prediction of CRT response in a larger population. In detail the project aims at: